Brief history: From 2003 till today

Michael Westenberg, who had plunged into an international business life at the age of 23 by relocation to Hungary, started his own venture in 2009 by registering WestMountain Consulting Ltd. at the Istanbul Chamber of Commerce.

TIC-Turkey was established as a foundation in Rotterdam, The Netherlands in 2003. A particular characteristic of this enterprise that proved to be the foundation of the business model of the NXT Group was of it being a company, which operated in a tight business arena with both public and private sector organizations. It was during this period that the company started to represent Dutch companies in the Turkish market.

The approach to grow NXT’s presence into other emerging markets was initiated in 2014 with the planned merger of on Indian based Market Expansion Service Provider. Eventually the company was taken-over in 2016.

Since 2011, various different partnerships have been established with industry and branch organizations in The Netherlands. In 2011 NXT became lead partner of the Turkey-Desk from the EVO-Fenedex, in 2015 NXT started its collaboration with the Turkey Business Council of the NCH and in 2017 FME-NAFTC appointed NXT as its service provider in India and Turkey.

Then, in 2014, came a period when NXT’s business areas were widened. The Group had now arrived at a stage where it was engaged in providing a broad spectrum of services that ranged from executing market research to activating local sales and distribution activities on behalf of it partners in India and Turkey.

Establishment of the NXT Group

The NXT Group of Companies BV was founded as the group’s holding company in 2015. The holding aims to achieve growth, to adapt the organization towards achieving its goads and press forward for the internationalization of the organizational structure.

It was in 2016 and 2017 that the NXT Group added new trading companies to its corporate body; headed towards facilitating import, export and foreign trade services. In 2016 a second company was established in Bangalore – India and in 2017 a trading company activated in Bogota – Colombia.

Activating e-commerce sales for FMCG clients became a services NXT started in India in 2018. Due to India’s booming e-commerce growth a strategic decision was taken to form a separate NXT eCOM division in 2019 with its sole focus to become a prime e-commerce enabler for European FMCG brands in Europe, Turkey and India. In 2020 NXT eCOM maintains an omni-channel network including 60 online market places.

As of 2020 the NXT Group entered the strategic direction to build sustainable market value by becoming a specialist Market Expansion Service provider in growing sales and market share for its Technology & Performance Material clients at least 3 emerging markets. For its FMCG clients the NXT Group strives to grow it’s omni-channel network in Europe, Turkey and India and expand its brand portfolio and online trading volume. To facilitate the NXT Group’s organizational growth it will be open to explore strategic partnerships with other Market Expansion Service providers. 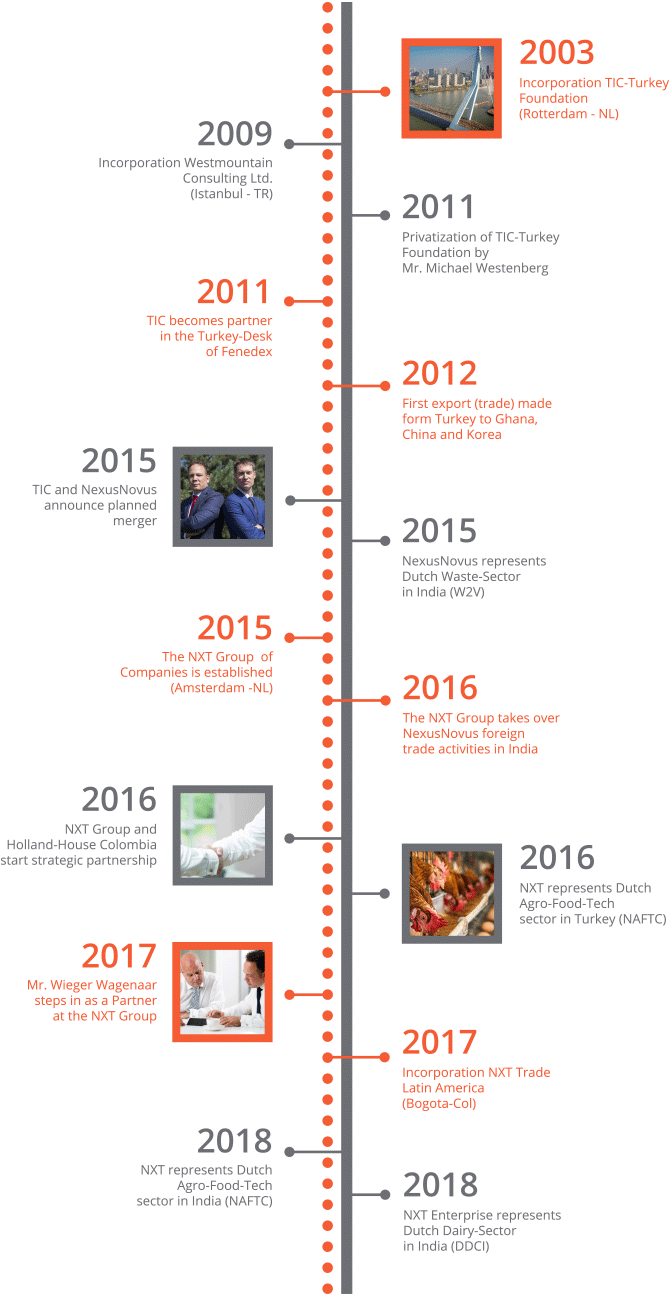